Darjeeling is a city and a municipality in the Indian state of West Bengal. It is located in the Lesser Himalayas at an elevation of 6,700 ft (2,042.2 m). It is noted for its tea industry, its views of Kangchenjunga, the world's third-highest mountain, and the Darjeeling Himalayan Railway, a UNESCO World Heritage Site. Darjeeling is the headquarters of the Darjeeling district which has a partially autonomous status within the state of West Bengal. It is also a popular tourist destination in India.

The recorded history of the town starts from the early 19th century when the colonial administration under the British Raj set up a sanatorium and a military depot in the region. Subsequently, extensive tea plantations were established in the region and tea growers developed hybrids of black tea and created new fermentation techniques. The resultant distinctive Darjeeling tea is internationally recognised and ranks among the most popular black teas in the world.

Darjeeling has good road connectivity with cities like Gangtok (96 km) and Kalimpong (50 km). Regular buses are available for Darjeeling from nearby towns like Siliguri, Gangtok, Kalimpong and Kurseong. Though the buses are an economical option, these are quite time consuming and it is recommended to take a cab instead of travelling in buses. Buses for Darjeeling are also available from Kolkata, however they are quite time taking so it is advisable to take your own vehicle if you are travelling by road.

The Darjeeling railway station is administered by the Darjeeling Himalayan Railways (DHR). The nearest railway station in Darjeeling is at New Jalpaiguri (62 kilometres from the main town) which connects major Indian cities like Kolkata, Delhi, Guwahati, Chennai, Mumbai, Bangalore, Bhubaneshwar and Cochin. The DHR Toy Train service starts at New Jalpaiguri and will get you to Darjeeling at a speed no faster than 30 miles per hour. It takes 7 hours and halts at Batasia Loop from where passengers can take photographic shots of Mt. Kanchenjunga.

How to reach Darjeeling by air is a question asked mostly. So those thinking of coming to Darjeeling from far away cities can get their air tickets booked till Bagdogra airport, which is the nearest air base serving the hill town. A number of carriers including Air India, Jet Airways, SpiceJet and Indigo operate regular flights from cities like Delhi, Guwahati and Kolkata to Darjeeling. After reaching the airport, travellers can hire taxis or cabs to reach Darjeeling, which is around a 3-hour drive. The drive from Bagdogra to Darjeeling is absolutely mesmerising and on the way, one can experience some lovely and breathtaking sights of greenery and misty mountains. 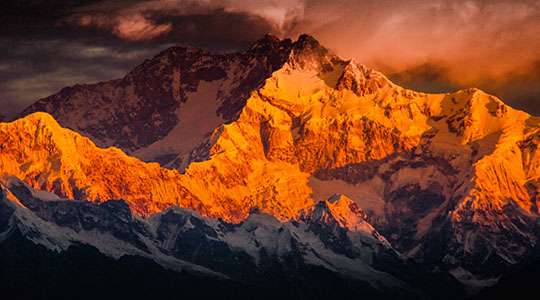 Lying at an altitude of 2590 meters and a distance of 13 kilometres away from the Darjeeling, Tiger Hill is most famous for its splendid sights of sunrise from where you can see the peaks of Kanchenjunga illuminate before the sun is seen at lower elevations. 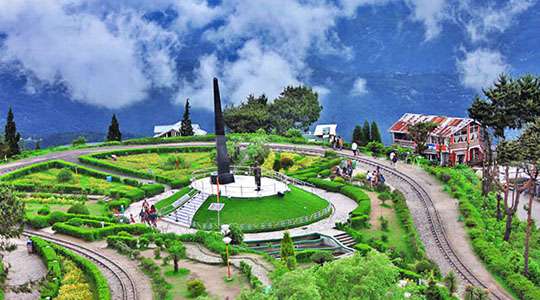 Batasia means airy space. The Loop serves a vital purpose for the toy train but is also an attraction in itself. The loop goes around a garden. The mountain garden is beautified with fresh green grass, seasonal and perennial flowers and shrubs. 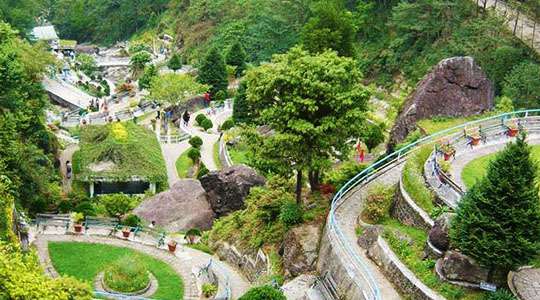 The Rock Garden (also known as Barbotey Rock Garden) at Chunnu Summer Falls and Ganga Maya Park are recently added tourist attractions in the hilly town of Darjeeling in the state of West Bengal, India. 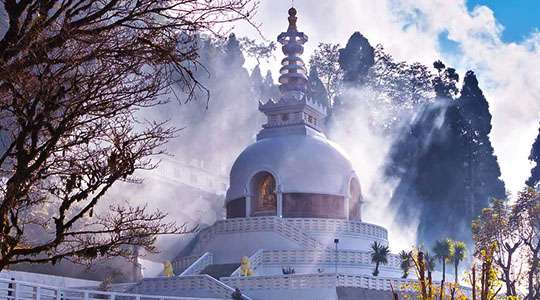 Located on the slopes of Jalapahar hills in Darjeeling, the Peace Pagoda (also known as the Japanese Peace Pagoda) is a well-known Buddhist temple and monastery. The temple was built under the supervision of Nichidatsu Fujii who was a Buddhist monk from Japan 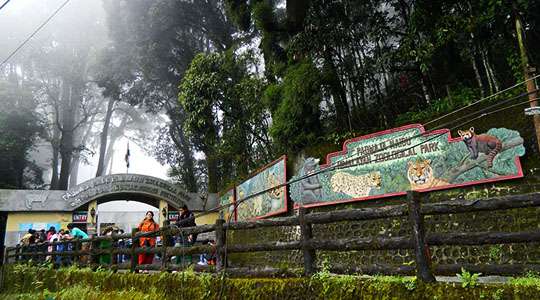 Padmaja Naidu Himalayan Zoological Park (also called the Darjeeling Zoo) is a 67.56-acre (27.3 ha) zoo in the town of Darjeeling in the Indian state of West Bengal. The zoo was opened in 1958, and an average elevation of 7,000 feet (2,134 m), is the largest high altitude zoo in India. 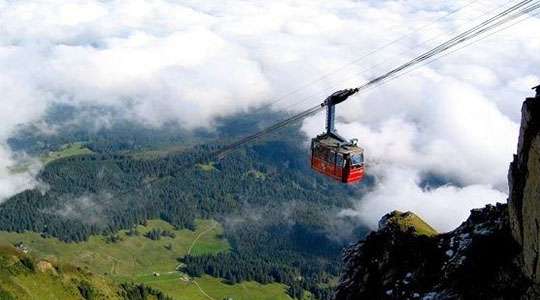