The place of monastery

Bhutan, officially the Kingdom of Bhutan , is a landlocked country in South Asia. Located in the Eastern Himalayas, it is bordered by the Tibet Autonomous Region of China in the north, the Sikkim state of India and the Chumbi Valley of Tibet in the west, the Arunachal Pradesh state of India in the east, and the Indian states of Assam and West Bengal in the south. Bhutan is geopolitically in South Asia and is the region's second least populous nation after the Maldives. Thimphu is its capital and largest city, while Phuntsholing is its financial center.

Bhutan's independence has endured for centuries. It has never been colonized in its history. Situated on the ancient Silk Road between Tibet, the Indian subcontinent and Southeast Asia, the Bhutanese state developed a distinct national identity based on Buddhism. 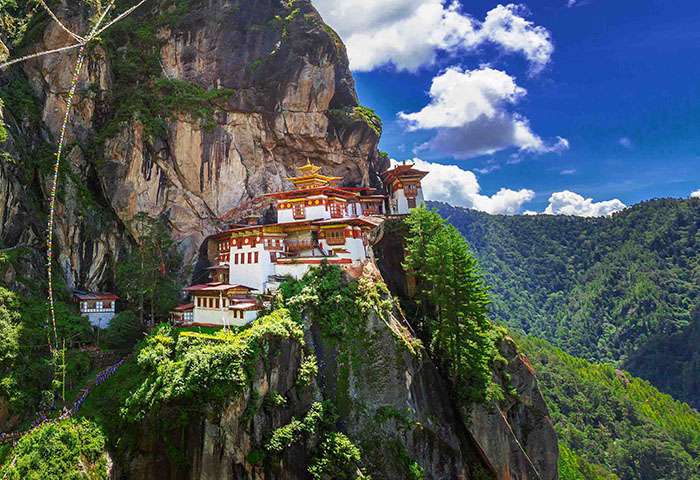 There are three land border crossings located along the southern border that is linked to India only. Phuentsholing, Gelephu and Samdrup Jongkhar. Road permits are required if you wish to get in by road. These permits can, however, be processed along with your visa.

There are no railways in Bhutan. Travellers, therefore, has to reach the nearest railway station and then take local transport or a bus or cab to reach Bhutan. The most convenient, and also the best, option out of all is entering Bhutan from Siliguri, New Alipurduar, Hasimara or New Jalpaiguri in India. Hasimara is situated at a distance of 15 km from Jaigaon, the border town on the Indian side of the border (near Phuentsholing). So, you can reach Hasimara by train, and then take a cab to Phuentsholing, where you will have to take a permit from the check-post to enter places like Paro and Thimpu in Bhutan. New Alipurduar railway station (North Bengal) is situated at a distance of 60 km from Jaigaon. You can take a bus ride or a taxi ride from New Alipurduar to Jaigaon.

The Paro International Airport is the only airport in Bhutan. It is located in the south-west of the country and caters only to Druk Air with flights connecting Bangkok, Delhi, Kolkata, Bodhgaya, Bagdogra, Guwahati, Kathmandu and Dhaka to Bhutan. The fares are a little steep. However, it is also widely considered to be one of the toughest airports in the world to land. Bhutan has three other domestic airports. In the south-central region is the Gelephu Airport, Yonphulla Airport is located in the eastern side of Bhutan, and the Bathpalangthag Airport is in the central part of Bhutan. However, flight operations are now permanently closed in Yonphulla and Bathpalathag airports. Chele La Pass at over 13,000 ft to the west above the Paro Valley is the highest road pass in the country and has amazing views of the Himalaya especially that of Mt. Jhomolari, Bhutan’s most sacred peak at over 22,000 feet. 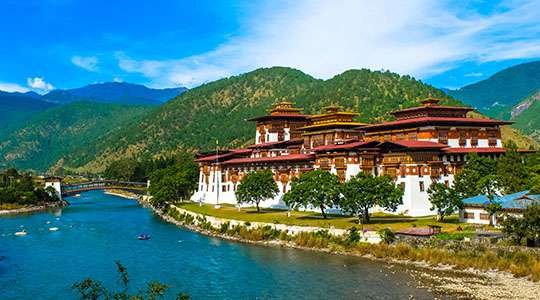 The Punakha Dzong, also known as Pungthang Dewa chhenbi Phodrang (meaning "The palace of great Happiness or Bliss"), is the administrative centre of Punakha District in Punakha, Bhutan. It is the second oldest and second largest dzong in Bhutan and one of its most majestic structures. 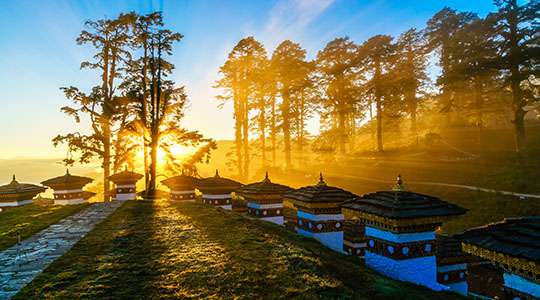 The Dochula Pass is a mountain pass in the snow covered Himalayas within Bhutan on the road from Thimpu to Punakha where 108 memorial chortens or stupas known as "Druk Wangyal Chortens" have been built by Ashi Dorji Wangmo Wangchuk, the eldest Queen Mother. 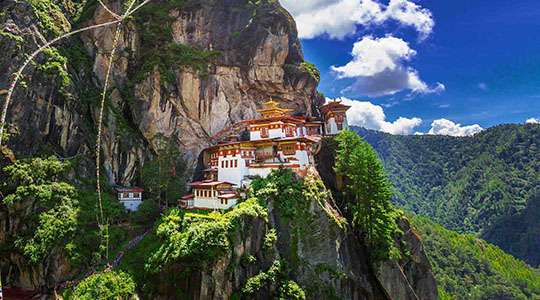 Paro Taktsang (Dzongkha also known as the Taktsang Palphug Monastery and the Tiger's Nest), is a prominent Himalayan Buddhist sacred site and the temple complex is located in the cliffside of the upper Paro valley in Bhutan. 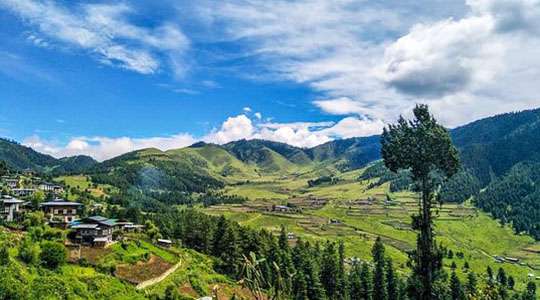 The Phobjikha Valley (also spelt Phobjikha and, in the past, Phubjikha, the suffix kha means valley in Dzongka) is a vast U-shaped glacial valley, also known as Gangteng Valley named after the impressive Gangteng Monastery of the Nyingma sect in central Bhutan 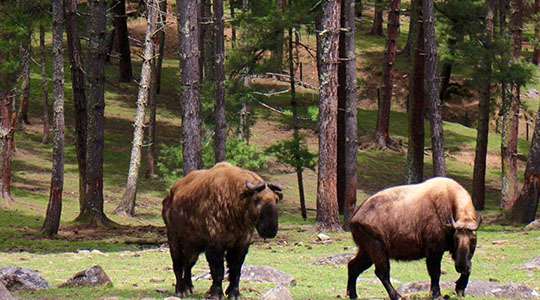 Motithang Takin Preserve, located in the Motithang district of Thimphu, Bhutan is a wildlife reserve area for takin, the national animal of Bhutan. Originally a mini-zoo, it was converted into a preserve when it was discovered that the animals refrained from inhabiting the surrounding forest even when set free.